6 And the men of Gibeon sent to Joshua at the camp in Gilgal, saying, “Do not relax your hand from your servants. Come up to us quickly and save us and help us, for all the kings of the Amorites who dwell in the hill country are gathered against us.” 7 So Joshua went up from Gilgal, he and all the people of war with him, and all the mighty men of valor. 8 And the Lord said to Joshua, “Do not fear them, for I have given them into your hands. Not a man of them shall stand before you.” 9 So Joshua came upon them suddenly, having marched up all night from Gilgal. 10 And the Lord threw them into a panic before Israel, who[a] struck them with a great blow at Gibeon and chased them by the way of the ascent of Beth-horon and struck them as far as Azekah and Makkedah. 11 And as they fled before Israel, while they were going down the ascent of Beth-horon, the Lord threw down large stones from heaven on them as far as Azekah, and they died. There were more who died because of the hailstones than the sons of Israel killed with the sword.

12 At that time Joshua spoke to the Lord in the day when the Lord gave the Amorites over to the sons of Israel, and he said in the sight of Israel,

“Sun, stand still at Gibeon,
and moon, in the Valley of Aijalon.”
13 And the sun stood still, and the moon stopped,
until the nation took vengeance on their enemies.

Is this not written in the Book of Jashar? The sun stopped in the midst of heaven and did not hurry to set for about a whole day. 14 There has been no day like it before or since, when the Lord heeded the voice of a man, for the Lord fought for Israel.

15 So Joshua returned, and all Israel with him, to the camp at Gilgal. 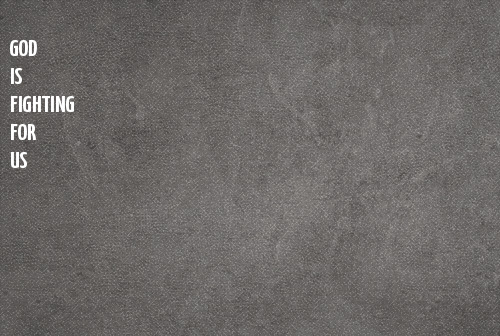 More in GOD IS FIGHTING FOR US